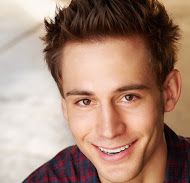 Corey Craig was a six-year-old living in Lincoln, Nebraska when he lost his father in a tragic accident and began “acting out and getting into more than his share of trouble.” Not until the eighth-grade did Corey stumble upon the one place where his rambunctious and outspoken nature were accepted and encouraged: theatre Class. Once unleashed, Corey began developing a real sense of his own artistic voice.

Corey currently resides in Toluca Lake, where he is an actor, writer, producer, and comic. He has numerous television and film appearances, including Godzilla, Grey’s Anatomy, Shameless, and The Guild. He produces Cool Beans Comedy, and founded Troublemaker Foundation, an organization that inspires youth to achieve their potential through goal setting. Corey’s TEDxLincoln talk revolves around three key areas that are crucial for youth: Accept, Empower,  Achieve. His challenges others to pay it forward, and cause a positive ripple effect.