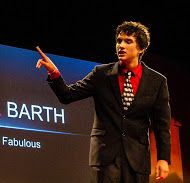 Michael has performed for high school and community theatre productions since he was five years old. He spoke at TEDxYouth@Lincoln and was invited to share some of his story on the TEDxLincoln stage as well. He will be performing part of his Nebraska State Championship poetry program – a poem entitled Swingset by Andrea Gibson.

He hopes that his speech may touch the hearts of everyone who hears it, and that it may bring a change to how individuals view themselves as well as others.