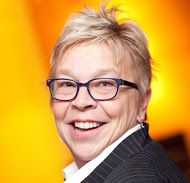 Marni will talk about what it means to be an inquisitive tourist of your world. “Everyday, the curious are the lovers of life--flexible but not compliant. Curiosity is the seeker of innovation, the birth of possibilities the gatherer of colors. Curiosity is the music.”

In college Marni waited tables, “badly,” and delivered flowers, that is until the van rolled down Sumner Street and hit three parked cars. Marni, earned degrees in Theatre, Speech, and English taught high school before leaving to pursue stand-up comedy full time. “Like Steinbeck's Travels with Charlie, I went from town to town, city to city, honing my craft, traveling with Frances, my lovely golden.”

Marni was one of only 6 women in 20 years to have become one of the five finalists in the prestigious International San Francisco Comedy Competition, where over 400 comics competed. She has delivered over 1,000 keynote speeches in over 45 states, Canada & Cruise ships….”some to an audience” and has performed on Showtime and Life Time's "Girls Night Out." Comedy has now segued into Keynote Speaking, “the best combination of teaching and comedy…the best balance for me, I believe the best way that I serve.”