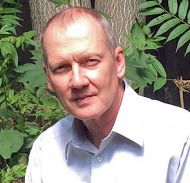 Since 2010, Tim and his wife have gone from a measly little tomato patch to six tenths of an acre (the equivalent of roughly 65 yards of a football field). They have planted over 50 fruit and nut trees and two dozen berry beds, set up two chicken coops and two beehives, and now have 20 neighbors actively participating in what they call their ‘hamlet.’

They are growing food in the “Hawley Hamlet.” But equally important, they’re growing ‘community.’ And that’s a good thing. Because given the risks climate change and extreme weather are posing to our environment, we’re going to need all the food and community the city can produce.

Tim is a native son of Nebraska, born in Beatrice, raised in Gering in the Panhandle and for the past 37 years, he has lived in Lincoln. An English Major and UNL alum, Tim has spent most of my adult life involved in Nebraska politics, doing everything from serving as a VISTA volunteer to running local campaigns to my present post as State Coordinator for Nebraskans for Peace (a position he has held for over 20 years now).